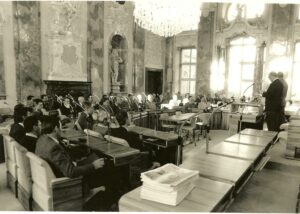 The International Search and Rescue Advisory Group (INSARAG) was established in 1991. This establishment followed the initiatives of the specialised international Urban Search and Rescue (USAR) teams who operated together in the Mexican earthquake of 1985 and the Armenian earthquake of 1988. So as not to duplicate existing structures, the group was created within the framework of existing humanitarian coordination within the United Nations (UN). To this end, the group’s secretariat falls within the Response Partnerships Section (RPS) of the Emergency Response Support Branch (ERSB)of the Office for the Coordination of Humanitarian Affairs (OCHA) in Geneva.

Under this umbrella of the UN, the INSARAG has successfully pursued the creation of a UN General Assembly Resolution on “Strengthening the Effectiveness and Coordination of International USAR Assistance” in 2002. This resolution is widely considered to have underpinned much of the progress achieved by the group over the last two decades.

The INSARAG’s primary purpose is to facilitate coordination between the various international USAR teams who make themselves available for deployment to countries experiencing devastating events of structural collapse due primarily to earthquakes. The group achieves such coordination through facilitating opportunities for communication between these groups ahead of such events. These meetings of teams have resulted in many practical agreements between them that have streamlined working together during actual disasters. Much of the details on how these teams have agreed to work together can be found in the INSARAG Guidelines, a living document outlining the principles agreed within the group.